The Power Of Five 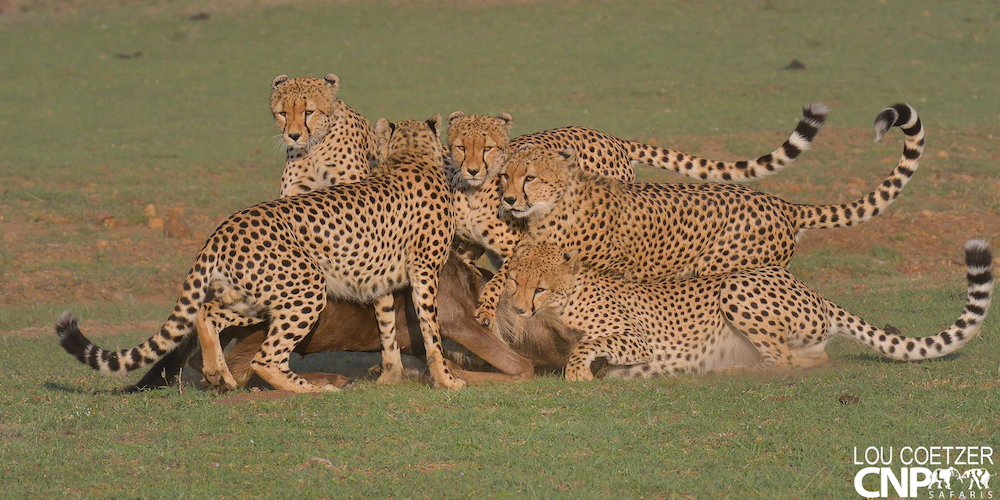 The hottest subject in Masai Mara during September this year was not the next big crossing but rather the five male Cheetahs operating in the Greater Mara. An interesting aspect about this 5 male coalition is that only two are brothers. What happened that 3 other male Cheetah join the two brothers? More so how long will this coalition lasts as there is already a bit of aggression among the five male cheetahs with mainly four of them bullying the fifth one.

Five adult male Cheetah need to catch every day and they need larger prey. They focused on White -bearded wildebeest (mostly on calves ) and Topi although they are quite capable to take down adults of both species.

For the largest part of September the biggest concentration of wildebeest was in central and southern part of the Greater Mara. Based in the Mara Triangle we had to plan very carefully to get to the Five Cheetah and back at base camp by dark but with two super meals packed by the brilliant Kichwa Tembo staff we easily managed. The “Five Males” were more elusive than one would have thought. Even with the help of the Cheetah Research Group we search for them in vain on a few occasions. Luckily we always had a lot of other opportunities to photograph crossings and other interesting behaviour. Then my luck turned . The “Five Cheetahs” crossed the Talek river going north. Now they were closer to my base and I planned carefully how to get to them in time early in the morning before they kill. We worked the plan and I really love it when a plan comes together!

Within 5 minutes after I found the “Five Brothers” the hunt started. Three of them were laying flat behind a termite mount and the other two were out of sight when the trap was set. A large group numbering thousands of very nervous wildebeest slowly moved closer to the three that I could see and then all hell broke loose. A large number of the wildebeest started running, some away from me and some towards me. At that moment I noticed that one of the Cheetahs behind the termite mount were gone and the two remaining Cheetahs were anxiously looking in the direction of a chaotic bowl of dust. 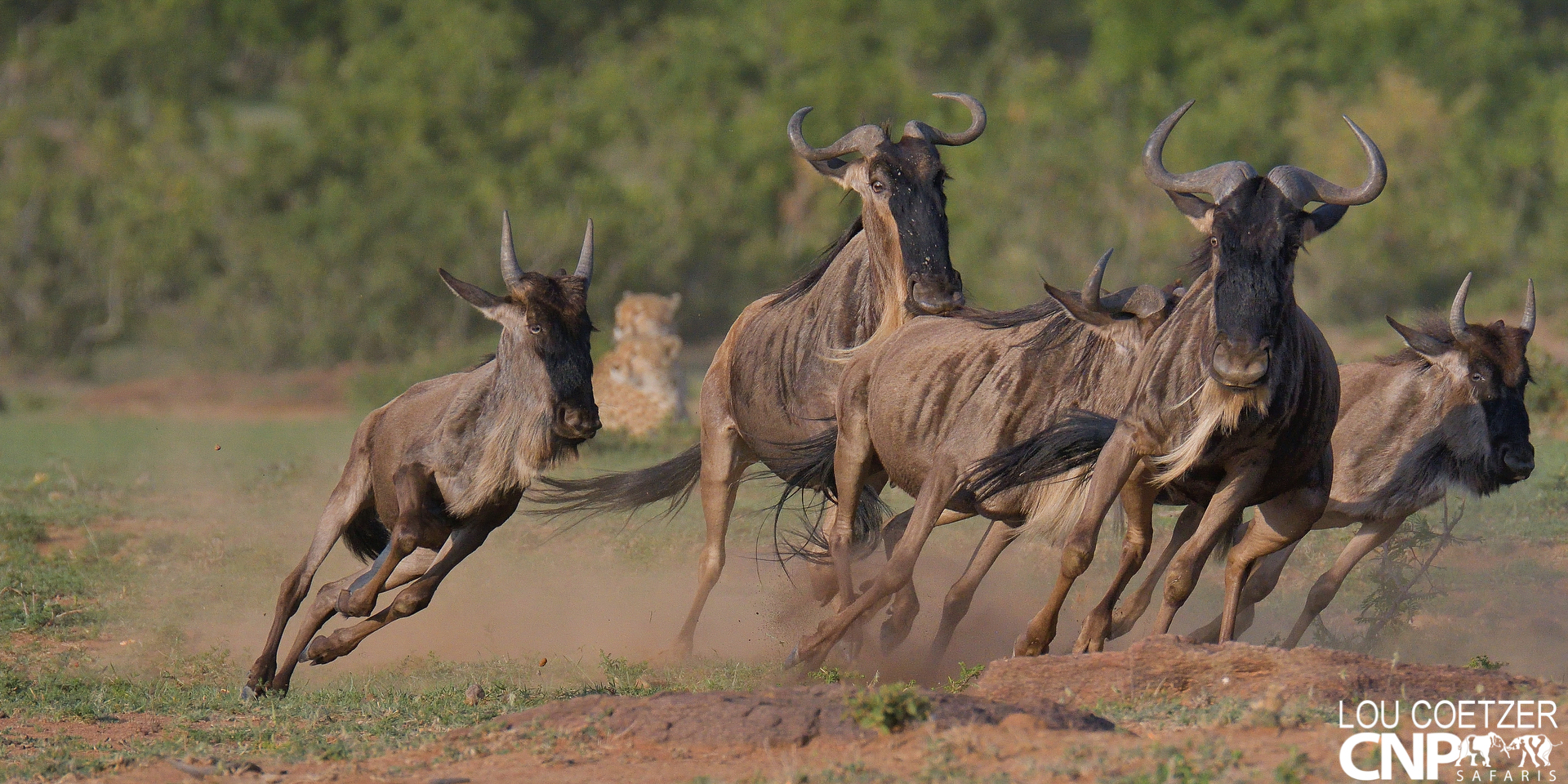 It was time to go! As we were rushing over the short grass plains of Masai Mara I kept on telling my &Beyond guide to keep us on the side of a glorious early sun rise. Our vehicle arrived second on the scene. With the dust settling in the background , four Cheetahs struggling to bring the wildebeest calf down and the 4 CNP photographers with me firing flat out, I made a crucial decision to move the vehicle. Although our vehicle was well placed we were shooting too much to the shadow side of the drama unfolding in front of us. It was time to go again! 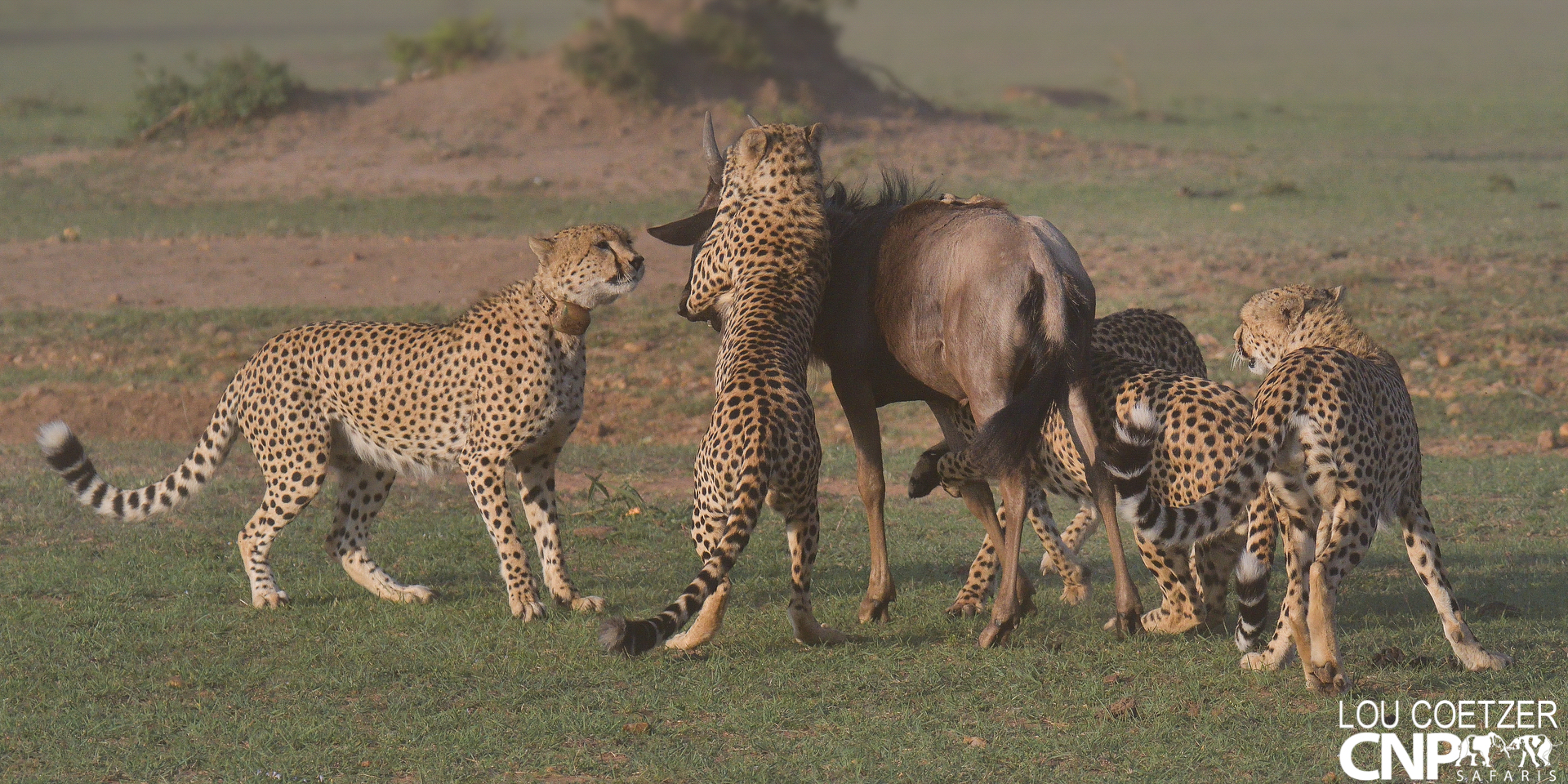 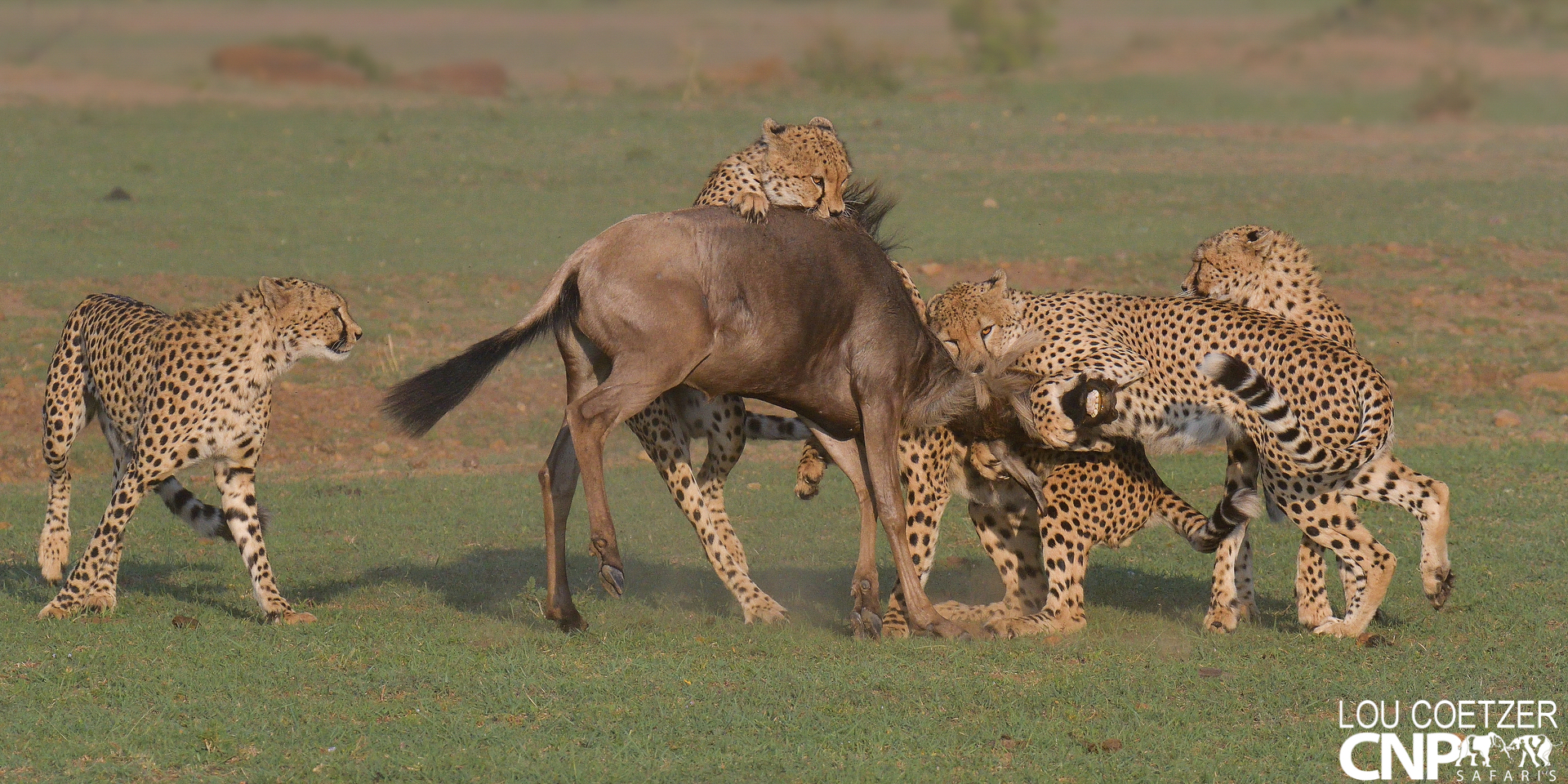 Now three of the cheetahs have a powerful grip on the neck and back of the calf and forced it to its knees. 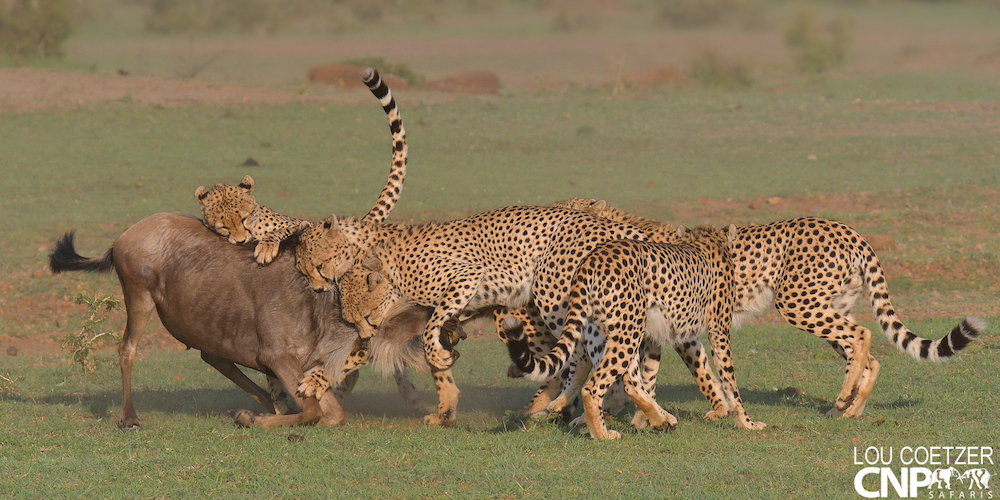 Finally the brave White-bearded wildebeest calf succumbs and four of the five Cheetahs can finally relax their grip while the fifth keeps his grip on the calf’s throat.

I do not know what the future holds for the “Five Males”  although I am not too opportunistic that this coalition will last long. Be it as it may I feel oh so privileged to have met the “Five Cheetahs” at last.